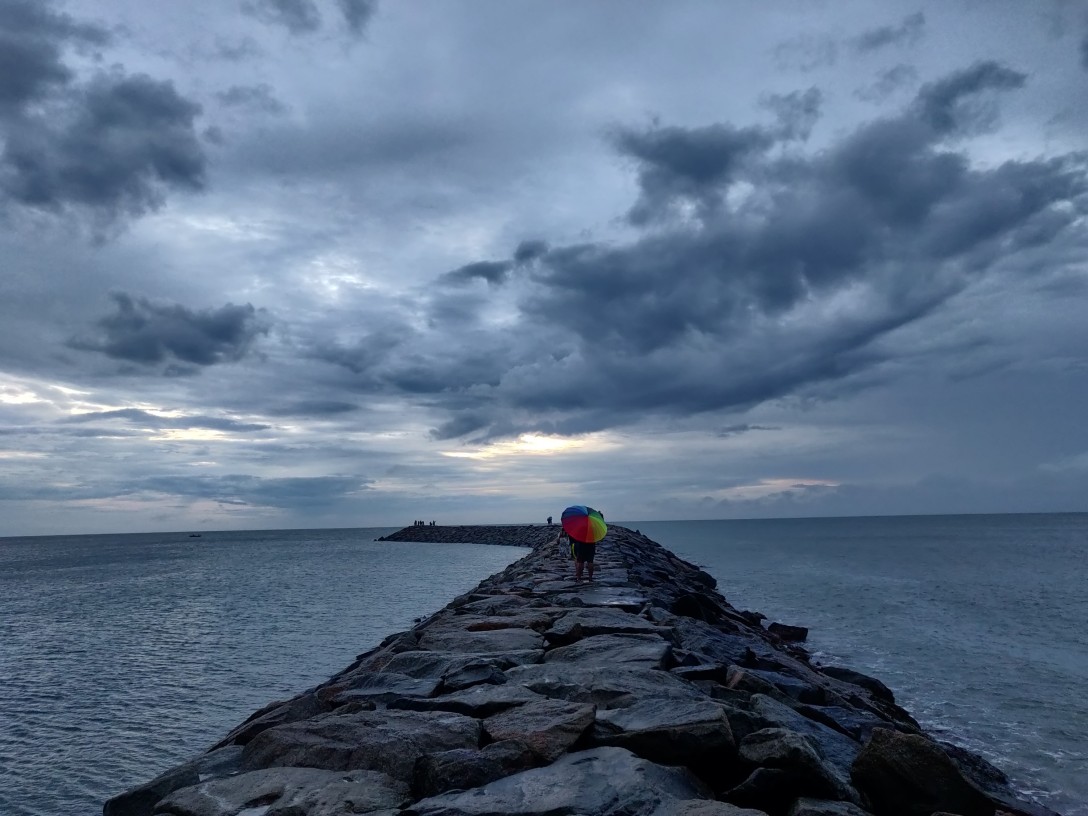 Tamil Tales is the series of experiences from my recent backpacking trip to the state of Tamil Nadu (TN). Hoping you would enjoy the journey as I take you through the inner echoes on outer experiences.

I headed to Rameswaram with a halt for a couple of hours in Madurai. As it was backpacking so opted for local transport. Rain delayed my arrival in Madurai from Kanyakumari had limited time to visit Meenakshi Amman temple, have dinner and come back to catch a bus for Rameswaram. But before that had to check on bus timings and book a ticket too!! Yes, I couldn’t pre-book it due to COVID issues had to rely on on-spot State Transport booking. So as soon as I reached Madurai central bus stand, I looked for Rameswaram bus departure. Trust me it was not easy to locate- with the boards are written in Tamil script looked more like jalebis to me; me being Tamil illiterate, people there not knowing Hindi and few knowing bit of English. Our communication English would go without much usage of auxiliary verbs like this:
Me (to anyone in uniform conductor/driver): Anna, Rameswaram bus?
He (pointing randomly somewhere): There
Me (pointing at my watch): What time?
He (looking puzzled): No time (meaning he doesn’t know the time); go there (again pointing some random direction)
After a couple of re-takes of the above dialogue with different people, I finally reached to correct spot, and thankfully the person there knew a bit of Hindi. He looked like a private tour operator. I recalled my conversation with an auto driver earlier he said “sister, go by state bus, private bus no safety”. I told him I want to go by state bus and was about to leave. He assured me he will keep a seat for Rameswaram in the State-operated bus ‘through his contacts’ additionally he offered to let me keep my rucksack there and visit the temple even helping in calling an auto ride. Just about when I was thinking why he is doing all this, what’s in it for him? He said, ‘madam darshan le lo. Rameswaram sightseeing ke liye cab book kar lena yaha’ Aha… so this was the catch. Considering the time at disposal, I decided to go with his offered help noted his number, took a picture of his office board, noted the auto number he had called, and left for the temple.
Madurai – is called the cultural capital of TN-like any other big city in India it was densely populated, roads were already flooding with vehicles and recent rain has added to the traffic jams. I have heard about the veg food tours in the city but there was no time my mind was focused to visit the temple, dinner, and catch the bus. Even after “dauda dauda bhaga bhag sa” stunt I couldn’t get a view of the main idol as they closed the main temple as per COVID protocols. Never the less whatever I could see of the temple the view mesmerized me with its intricate work, huge gopurams (towers), temple complex – an astounding monument art and architecture combined. Again, with a reason to come back trying to cut through city traffic and to catch a bus for Rameswaram I left the temple premises with a heavy heart. And now wondering… is my luggage safe?? Will I get the bus?? (to be continued…)

Join the journey in the next blog post of the series “Tamil Tales”.

© 31.10.2021 The copyright and other intellectual property rights of this content and pictures are with the author and Soulसंवाद .